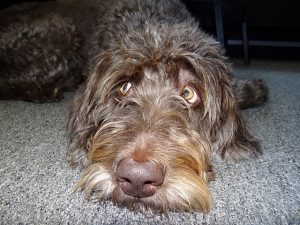 Siena was born on in November, 2006 and we brought her home at 9 weeks old. She is a female, chocolate Labradoodle – half Labrador Retriever and half Standard Poodle. She is named after the color, but her name is spelled like the city in Italy. People call her Siena, Sia (pronounced seeya), or sometimes even Si (like see). She answers to any and all of them. She was a gift for Rachyl after she and Steven suffered a traumatic miscarriage – another difficulty caused by her EDS. Siena’s joyful yet calming presence immediately began to help Rachyl.

Rachyl and Siena quickly became inseparable and as Rachyl’s health worsened, Siena’s commitment to being by her side only increased. When Rachyl began having serious breathing issues and intractable coughing spells, Siena would find Steven and alert him that her “Mom” needed help.

Siena soon became a registered Service Dog for her Mom. She assists Rachyl with mobility and stability as Rachyl’s EDS can make simple tasks difficult. Her most unique characteristic is the ability to sense when Rachyl’s oxygen level is low and alert her that she needs to check her oxygen supply. It was initially thought she could sense this via smell but it isn’t clear as she’s able to detect this even when Rachyl is in a different room. We’ll be adding one of our favorite stories about how Siena sensed Rachyl’s low oxygen levels during Rachyl’s first brain surgery while Siena was in the waiting room at the hospital with Steven. 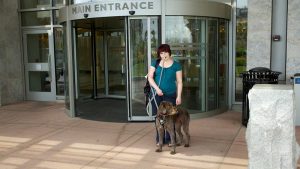 Siena enjoys going everywhere with her mom and meeting new people, but is afraid of fireworks and dislikes people using whistles. She enjoys staying at hotels when she has to travel for Rachyl’s ongoing airway surgeries but isn’t overly fond of the four days straight (each way) of driving in the car. Her role models are Lassie and Old Yeller.

Siena faithfully served as Rachyl’s best friend, guardian, cuddle-pup, and literal life-saver. Sadly, during the height on the pandemic, Rachyl and Steven learned that their beloved Girl had advanced lymphatic cancer. Losing such a close family member was the hardest of of Rachyl life thus far. They said goodbye to her, at home, on July 14, 2020. She’s playing now, across the Rainbow Bridge, and is still Rachyl’s faithful guardian – albeit now, her Guardian Angel. Steven and Rachyl’s close friend and vet best summed up Siena: “In my time as a vet for more than 20 years, I’ve treated thousands of animals and Siena was the first truly ‘magical’ dog I ever met. Her abilities, intuition, and devotion to Rachyl were unlike anything else I’d ever seen.”

At the urging of our vet, vet specialist, and other service dog experts, we brought home another pup in December, 2018. We were told that if a young pup spends time with an older, wise dog, the older dog will “imprint” their abilities so the pup learns to be able to do the same things and essentially, Siena would be able to “train” her eventual replacement. Being the incredible, Magic Dog that she was, she did just that. Siena and Lettie were inseparable almost immediately and Siena began to train her up. So Siena’s unique skills continue to live on.

Surgery Fundraiser for Rachel and Siena

A message from Rachel